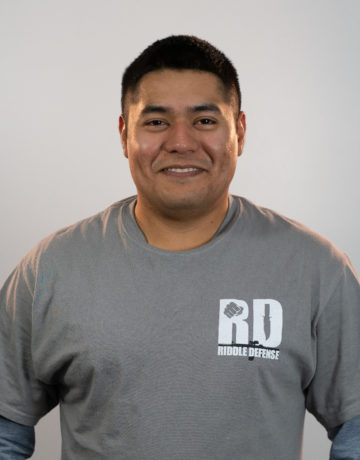 Born in San Diego, CA and moved to Fort Lauderdale, FL in 2001. Enlisted as an Infantry Rifleman in the United States Marine Corps in 2008. Deployed to Marjah, Afghanistan in February 2010, and served as a rifleman and IED Dog Handler. 2nd Deployment to Marjah, Afghanistan in June 2011, and served as an Infantry Team Leader. Graduated from Florida Atlantic University (FAU) with a double major in International Business and Trade, and Finance. Currently, works as a financial advisor with his wealth management team at Merrill Lynch in Delray Beach, Florida.

While in the Marine Corps, he became interested in close quarter combative in both room clearing and hand to hand combat. When he got out of the Marine Corps in 2012, it was already decided that he would to continue in at least one form of martial arts training. His first choice was Krav Maga, since it is quick, aggressive and to the point, which is how he met John Riddle. While training at Riddle Defense, he began training in Jeet Kune Do as well, which became part of his regular training. Martial Arts is a lifestyle and a part of who he is now.