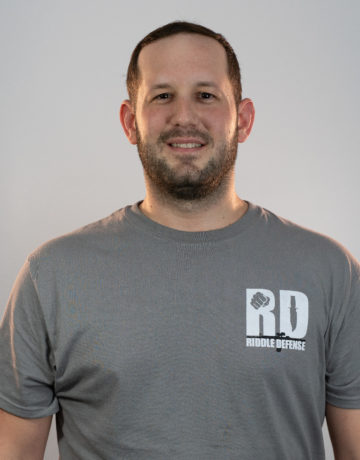 Originally from Israel, after living in several other countries, Amos finally relocated with his family to South Florida in 2002. He graduated the flight academy with a Bachelor’s degree in Aviation Management and Aeronautical Science in 2007, and earned an MBA in International Business from Lynn University in 2009. Currently working in the real estate redevelopment industry.

Having lived a number of years in Israel, I had been brought up understanding the importance of awareness and the need to have contingency plans and means for self defense. However, not until making a temporary return to Israel between late 2013 and mid 2014, had it occurred to me that I don’t really possess many of the skills that I would need in order to protect myself and my loved ones should an unfortunate situation present itself. And so, after researching options in my area, I decided to join Riddle Defense. I was intimidated by the environment at first, mostly because I had never done anything of the sort before. However, I came in with a goal and I knew that I had to follow through with it.

In addition to studying and training in Krav Maga and Combatives under John, I also take strength and fitness training classes with Leigh. The combination of the two has made me feel much more confident and stronger, both physically and mentally. I enjoy every moment I spend training with John, Leigh, and the rest of the team—PSDS has become my second family.